According to a new report, the manner in which businesses handle consumer data is now a top priority for consumers. In fact, 60 percent of respondents to the “IBM Cybersecurity and Privacy Research” survey, conducted by The Harris Poll on behalf of IBM, said they’re more worried about cybersecurity than war.

The survey revealed that while 78 percent of Americans consider effective data privacy policies to be “extremely important,” just 20 percent “completely trust” the organizations that store and control their personal information. It also noted that cybersecurity is now “a crucial consideration when making purchase decisions.” These results point to an increasing need for comprehensive and well-communicated data protection strategies. 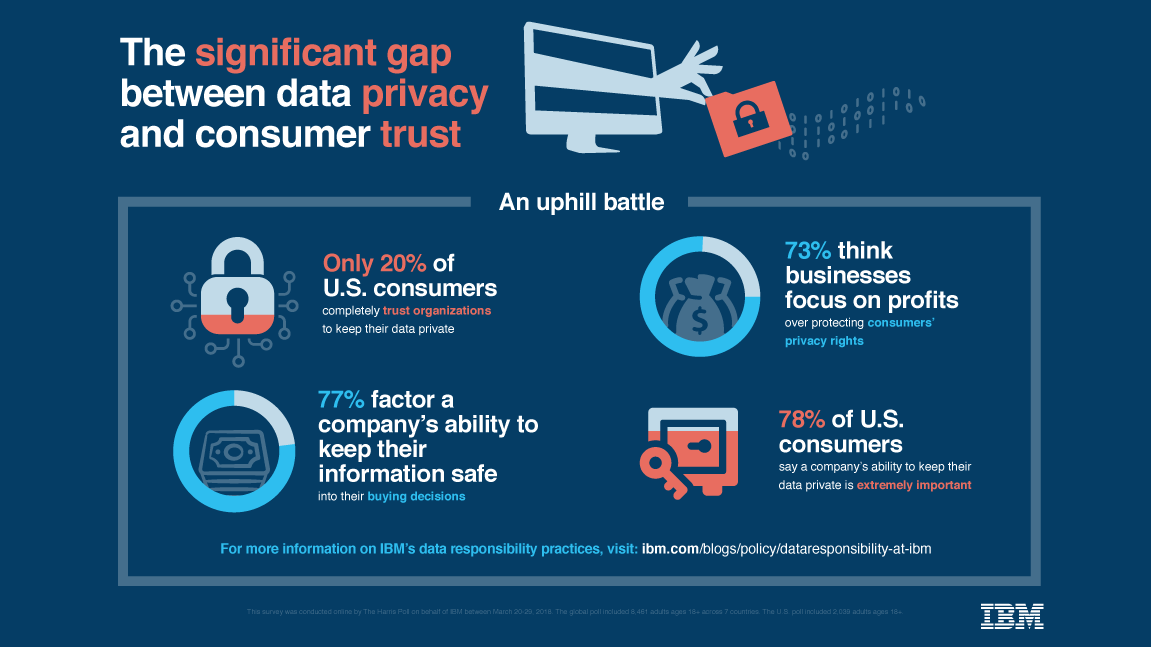 With e-commerce sales trending upward — the U.S. Census Bureau estimated that online retail sales across the U.S. hit $119 billion in Q4 2017 — users are increasingly aware of their online data privacy. More than half of respondents to a survey conducted by the Centre for International Governance Innovation (CIGI) indicated that they are more concerned about their online privacy than they were a year ago.

Consumer worry isn’t misplaced. According to Fast Company, some organizations working to meet upcoming General Data Protection Regulation (GDPR) privacy requirements are specifically updating their terms of service to exclude these protections if users live outside the European Union (EU).

“Increasingly, we are seeing companies around the world trying to balance providing personalized services to consumers while maintaining privacy,” said John Kelly, IBM senior vice president of cognitive solutions. “Getting this right requires companies working closely with each other and, importantly, with governments to ensure the right protections are in place.”

The Harris Poll survey found that 75 percent of consumers will not buy products from companies that they don’t trust to properly secure their data. What’s more, 73 percent said they believe businesses prioritize profits over consumers’ security needs.

It’s not all bad news for businesses, however: 63 percent of respondents said they trust organizations to help repair damage after a cyberattack, while 59 percent were “very confident” in companies’ current ability to protect information.

There is room for improvement. Seventy-three percent of respondents said it’s “extremely important” for companies to take quick action to stop a data breach. Meanwhile, 70 percent of global consumers said it’s time for governments to step in “given that businesses have not been able to do enough.”

“To combat the constant barrage of threats,” technology analyst Roger Kay wrote in a blog post, “governments around the world, the tech industry and tech customers need to work together  —  consistently and over time.”

In addition, 69 percent of respondents said they consider quick communication to be crucial in the aftermath of a breach, while 67 percent said companies should cover the cost of third-party protection services if data is compromised. In the U.S., two-thirds of consumers ranked defense against external actors as more important than internal policies about consumer data handling.

Data privacy is now a key public concern, pulling ahead of confidence in leadership and corporate social responsibility when it comes to driving consumer choice. As the report put it, cybersecurity is “not just an under-the-hood operational function, it is part of how companies are judged in the consumer marketplace.”